“The enemy of my enemy is my friend”

So says the millennia-old proverb attributed to, or practiced by virtually everybody since the Pharaohs.  But despite its resilience, history disproves it, time and again.

Equally persistent, but consistently true,  is the axiom that a group of people under attack, or perceived to be, will relinquish their treasure, their lives, and most of their liberties to a bold leader who promises to save their skinny hides.  To these two great themes can be attributed most of history’s greatest tragedies.

These errors again rear their heads as American progressives point fingers at Trump’s perhaps treasonous Russian connections, and openly or implicitly take sides with cold-war militarists in the CIA, industry, and media.

Fear makes people stupid.  But more accurately, it makes them gullible. The well-educated citizens of Wiemar Germany readily succumbed to Nazi claims that their esteemed democratic parliament -the Reichstag- was burned by terrorists in 1933 as the start of a communist revolution. (photo left).  And, Germans surrendered their rights, their country, and millions of their lives to a decade of Hitler’s thuggery.

The Reichstag wasn’t history’s first war trigger, nor its last.  Rulers have perpetually used war and fear of war to tax, conscript, and generally subjugate their domestic populations. Often threats were real, but wannabe despots typically exaggerate them for their own ends.

Well before the time of Christ, Chinese rulers forced peasants to build the Great Wall of China against Central Asian marauders.  At the same time, Athens & Sparta, long-standing allies defending Greece against the Persians, were becoming rivals.  The ensuing wars, taxation, and disease destroyed Athenian democracy.  So much for unity against a common enemy.

Half of living Americans remember the “Cold War,” when our whole country ducked for cover under school desks during nuclear attack drills.  Back then the House Un-American Activities Committee blacklisted innocent citizens for alleged “communist” sympathies, we meekly paid our taxes to build the deadliest military in world history, and sent our soldiers or intelligence services on “anti-communist” killing missions all over the planet. All because those commies scared us half to death. 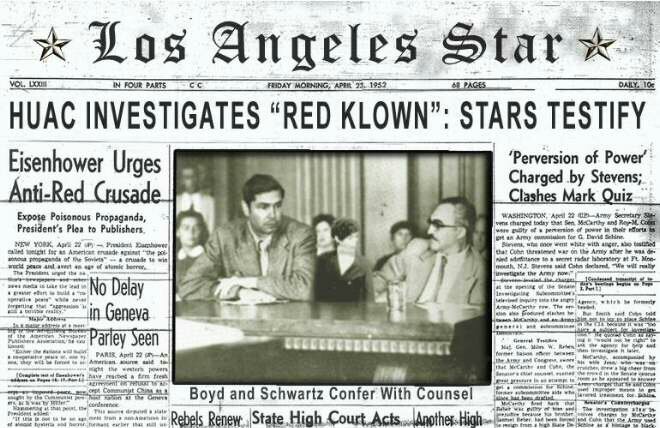 Throughout history, ruthless rulers, without a sufficiently aggressive enemy to rally the public behind their plans, have concocted one. Historians ever since 1933 have debated whether the burning of the Reichstag may have been such a “false-flag” operation, carried out by the Nazis themselves to provoke the very result it accomplished- the dismemberment of German democracy.[1]

Before that, in 1931, in the Mukden Incident, the Japanese army, masquerading as Chinese dissidents, blew up Japanese rail lines as pretext for Japan’s invasion of Manchuria.[2] Likewise, in 1939, German General Heydrich fabricated a Polish attack against Gleiwitz, Germany as a pretext for the invasion of Poland, and the start of World War 2.[3]  A few months later, Josef Stalin shelled his own Russian village, Mainila, as a ruse to justify invading Finland, and further tighten his control over Soviet citizens.[4]

“Everything Free in America”

In the 1950s, the CIA  carried out operation TP-Ajax, a campaign of bombings by agents-provocateur posing as communists to undermine the elected leftest Iranian Prime Minister Mohammad Mosaddegh, eventually replacing him with the reactionary Shah of Iran.[5]

Although the USA has never slipped into pure totalitarian hell like the Germans, American citizens have repeatedly relinquished freedoms, dollars, and lives to the drumbeat of war threats, too often on trumped-up charges. To list just a few:

Then there’s September 11, 2001.  The aftermath of attacks on the World Trade Center and Pentagon brought us the “Patriot Act,” the two longest wars in US history, and a $4+ trillion debit to the US Treasury.[6]  Responding to 9/11, among other things, we unleashed our military and intelligence services to conduct “enhanced interrogation,” and “extraordinary rendition,” and we comprehensively collected phone and internet data on every single human being in the country. Fear made us do it.

Was 9/11  a false-flag, wholly or partially carried out by elements of our own government to justify military adventures and the erosion of civil rights?  That notion is derided by mainstream media as a “conspiracy theory.”[7] But well-respected individuals -politicians, academics, pilots, military, & journalists- argue that that hypothesis should be considered.[8] Joining in, a host of architects and engineers conclude that the 9/11 destruction could not have occurred as described by the 9/11 Commission.[9]

And, just a year before 9/11, a consortium of  neoconservatives from government and industry were advancing “a new Pearl Harbor” as the best catalyst to recruit Americans to support their recipe for “tens of billions” more military spending.[10]  Leaders of this pro-armaments group included Halliburton CEO Dick Cheney, Ambassador Elliott Abrams, journalist Bill Kristol, Donald Rumsfeld, Paul Wolfowitz, & Richard Perle.[11]

This past week, much of the media has responded to the bat-shit crazy Donald Trump administration with a laser focus on the issue of Russia. Fueling this frenzy are leakers from US intelligence and executive agencies who reveal choice tidbits about Trump connections to Vladimir Putin. Hawkish Republican Senators McCain[12] and Graham pile on, along with virtually every Democrat, declaring that Russia is a mortal enemy, and we must “get to the bottom of it.”

Surely, there is truth in suspicions of Putin. Equally surely, Donald Trump is antithetical to responsible governance. But let’s look at who’s in on the discussion, and what that may mean for our country.

Remember that Trump, just three weeks ago, alienated pretty much everyone at the CIA with his grandiose speech decrying that they are his enemy, despite their revelations of Russian election tampering on Trump’s behalf. Personality aside, Trump’s apparent fondness for Putin and Russia puts him squarely at odds with the CIA and America’s more atavistic militarists.  Notably, these new Trump enemies are the exact people we were warned about in 1961 by Pres. Dwight Eisenhower cautioning us to avoid the “acquisition of unwarranted influence” by the “military industrial complex.”

Based on the leaks, Glen Greenwald, the Pulitzer-winning journalist who broke the Snowden documents, alleges that people in our spy agencies have basically declared war on President Trump. They want to bring him down from within- a bloodless coup by the “deep state” of invisible government.[13]

It’s hard to know for sure; those CIA leakers aren’t holding press conferences. But, on Tuesday, Bill Kristol, the neocon who founded the group which predicted a “new Pearl Harbor” back in 2000, tweeted this,[14]

There can be little doubt about Kristol’s meaning.  He prefers Trump’s demise at the hands America’s intelligence agencies, to a continued Trump presidency.  Do liberals agree?  Are we willing to climb on board with Bill Kristol & friends at the CIA?

I submit, if there is evidence of real treason presently in front of us, it is more from the Bill Kristols than from the Donald Trumps.  As Greenwald said,

Now, the New York Times is coming around. On Thursday it wrote,

..when institutions with vast power to eavesdrop, fine, harass and detain see themselves as locked in a zero-sum struggle for survival, it is often basic civil liberties and democratic rights that end up in the crossfire.[16]

Liberals need to be very, very careful of the alliances we make right now. Anyone preaching suspicion of Trump, because of Russia, certainly deserves a factual hearing, but that’s all.

If Trump is impeached, which I theorized he would be in my last blog, it will be at the hands of Republican militarists like McCain & Kristol who would also happily dispose of Medicare and Social Security to expand the military industrial complex.

We are now witnessing the strange bedfellows of militarists -pushing a continued Cold War agenda of arms and Armageddon- allying with anti-Trump “Resistance Movement” liberals.  To repeat a hackneyed phrase,  “Be careful who you sleep with.”

...a continuing interest in promoting the integration of information often overlooked, and sometimes maligned.